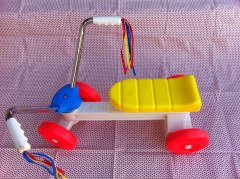 When our daughter was a wee tot we bought her a 4-wheel scooter for Christmas.  It unfortunately came with those three dreaded words, “Some assembly required.”  Giving it to her in the box and letting her put it together herself would have been an option. But I really didn’t want to have her using my tools at her young age, and run the risk of her showing me how they’re supposed to be used.
So I set about assembling the thing myself.  In the process of jointly building a scooter and character, I discovered a part was missing.  The instructions had an address to write to if a part was defective or missing.  I put the new toy together without the part for Christmas, and then sent the company the following letter.

Twas the night before Christmas and under the tree
Sat a Playskool Tyke Bike, a screwdriver and me.
The bike was in parts all snug in its box.
I began to assemble it with no major shocks.

When all of a sudden there arose such a clatter.
My wife ran to the room to see what was the matter.
“I can not complete this!” she heard me to say,
“I’m missing part 231-21a.”

Well, I put it together the best that I could,
Though my poor daughter could not steer it so good.
So you see, you would be a dear friend,
If part 231-21a you would send.

One day a package arrived in the mail.  I was surprised by the size, it was larger than the part I had requested.  On opening it I saw they had sent not just the part but a new bike.  It too needed to be assembled, but that was fine with me.  In the package was a form that the company used to indicate which part they were sending.  The form was crossed out, and handwritten across the bottom was the note, “Send whole unit.”

May your Christmas be completely merry, even if it’s not completely perfect.